A strong song tows us

The life of Basil Bunting 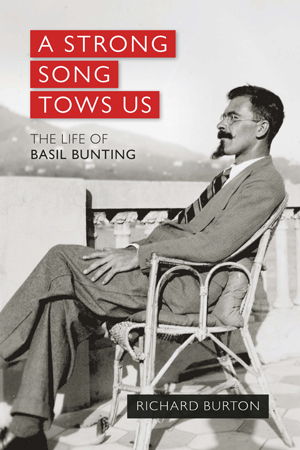 In this meticulously researched biography Richard Burton demonstrates why Basil Bunting is one of the greatest modernist poets. He explores Bunting’s fascinating life, takes a fresh look at such poems as ‘Villon’, ‘The Well of Lycopolis’ and Briggflatts and unpicks the mystery of his disappearance from public consciousness. Basil Bunting was Britain’s greatest modernist poet, yet his star has waned since his death in 1985. Bunting’s work was admired by the finest writers of the twentieth century, including W. B. Yeats, Ezra Pound, Ernest Hemingway, Ford Madox Ford and William Carlos Williams. His masterpiece, Briggflatts, catapulted Bunting to stardom and during the 1960s and 1970s he was the world’s most famous living poet, yet when he died he was practically penniless. During his long life Bunting was an artists’ model, roadmender, sailor, balloon operator, diplomat, spy, journalist and university lecturer. None of these was his true vocation – from an early age Bunting knew he was meant to be a poet. He lived in London, Paris, Rapallo, the US and Canada, and in Persia and Iraq, but his heart was always drawn to the north of England where he grew up and where he met the love of his life, Peggy Greenbank. Peggy remained in his mind throughout fifty years of separation until they were reunited after the publication of Briggflatts. Bunting believed that an artist’s work should speak for itself and he went out of his way to obscure his life from public view, even asking friends to destroy his letters. Fortunately much correspondence survives, and this, along with recollections from those who knew him and the evidence of many other sources, has enabled the piecing together of a vivid portrait of a brilliant, complicated and at times controversial man. Honorable mention, 2014 Pegasus Award for Criticism

‘Must surely stand as the definitive reference work.’ The Spectator

‘This is an extraordinary life, the tale of the century as it goes, and Richard Burton’s excellent detective work tells it vividly.’ Tom Pickard, poet and film-maker

‘irresistible…a life more interesting than fiction deserves to be told in detail.’ Modernism/Modernity

‘Excellently measured…holds its nerve in the grip of Bunting’s seemingly obsessive wandering…Burton makes the case for his subject with understatement and rigour. Through this it triumphs as a story an aim which its subtitle makes clear, shimmering somewhere between report and novella.’ Cambridge Humanities Review

‘This is an astonishingly individual, direct and engaging biography of one of the most important poets of the twentieth-century; it possesses that hallmark of the serious work, a sense that it really matters to the writer.’ Tears in the Fence

‘Very good…this book should have “START HERE” written on it.’ Lady Godiva and Me

‘Does full justice to a remarkable life…Burton deserves our thanks for having scoured some of the obscuring moss from his memorial, and allowed the lettering to shine through’ The New Criterion

‘Reads like a racy, picaresque novel…indispensable…a lavishly detailed, meticulously researched biography, which is unlikely to be bettered’ London Magazine

‘A life that sticks in the mind’ Oxford Today